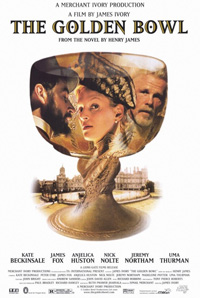 An intricately plotted tale of thwarted love and betrayal, The Golden Bowl tells the story of an extravagantly rich American widower (NOLTE) and his sheltered daughter (BECKINSALE), both of whom marry only to discover that their respective mates, a beautiful American expatriate and an impoverished Italian aristocrat (THURMAN and NORTHAM), are entangled with one another in a romantic intrigue of seduction and deceit.

Set in England and Italy between 1903 and 1909, The Golden Bowl is adapted from the Henry James novel by the acclaimed and award-winning filmmaking team of Ismail Merchant, James Ivory and Ruth Prawer Jhabvala, who have had great past success with James, namely in their films based on his novels The Bostonians and The Europeans. Such literary adaptations as these, as well as A Room with a View, Maurice, Howards End, The Remains of the Day, and now The Golden Bowl, are clearly a Merchant Ivory forte - the team has thirty-one Academy Award nominations and six Oscars for their screen adaptations, including two for writer Ruth Jhabvala, between them. But these films are also consistent showcases for their actors' best work, and The Golden Bowl is no exception. Thurman's passionate Charlotte Stant is her most challenging role so far; Nolte is a revelation as the brilliant and subtle Robber Baron; and screen legends Huston and Fox stand out in their supporting performances. Jeremy Northam's Prince is infused with a rare sophistication; and Kate Beckinsale (who will also star in the much-anticipated film Pearl Harbor, opening in May) shines as a seemingly naive beauty who proves to have the strongest will of all.