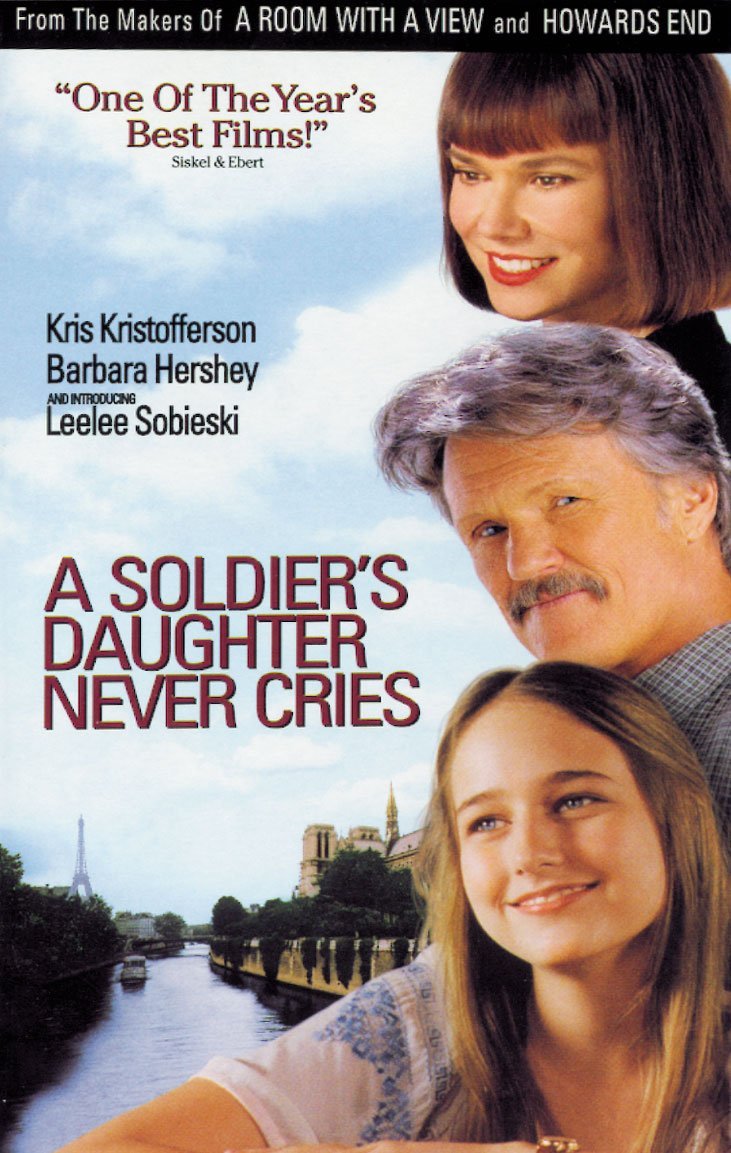 A Soldier's Daughter Never Cries is the story of an American family living in Paris in the mid sixties, told from the point of view of the daughter, Channe. The father, Bill Willis, is a successful expatriate writer (based on Kaylie Jones's father, the writer James Jones), a WWII veteran haunted by his experiences in the Pacific. His wife, Marcella, is an emotional, fun-loving woman. The film opens the day five-year old Benoit, a French orphan, is brought into the family for adoption.

Benôit's natural mother, an unmarried French girl who was only fifteen when her child was born, holds up the adoption proceedings out of feelings of guilt and remorse, thus terrifying the Willises with the possibility of Benôit's removal. Jealous, Channe retreats to the protective embraces of her Portuguese nanny Candida, who takes her frustrations out on the small boy. Benôit, who has been moved around from foster home to foster home, keeps his suitcase packed, ready at a moment's notice to be sent back to the orphanage. It is only after much tenderness and reassurance from Bill and Marcella that Benôit relinquishes his suitcase, and asks to have his name changed to Billy.

Against the backdrop of their parents' poker games and all-night parties, the children grow up attending a bilingual school where they struggle to be accepted. When necessary, Marcella intervenes at school, defending her children with a fierce loyalty and railing at the form-obsessed French teachers. Still, Billy wants - more than anything else in the world - to be American. Just as Channe reaches puberty, she is befriended by a sensitive and artistic boy names Francis Fortescue. Francis is fatherless, somewhat effeminate, and the son of an expatriate American mother. They become inseparable. Billy thinks Francis is weird, but Channe admires Francis' knowledge of opera, his ability to tell dramatic stories, and his courage in always being frank and up front. As sexual maturity overtakes Channe, the friendship becomes strained, and Francis, who is excluded from the school's teen-age party scene, becomes more and more withdrawn and morose as Channe looks romantically to the other boys. Their friendship collapses just as Bill announces that at the end of the school year, the family will be returning to the U.S. He explains that a congenital heart problem is getting worse, and he wants to be under the care of American doctors. The children's entire world is suddenly and unceremoniously left behind.

In Sagaponack, Long Island, on Labor Day weekend, the Willises arrive at their new home, an old farm house in the middle of vast, green potato fields. Bill teaches Channe how to drive, continues the tradition of all-night poker games, and plays down Marcella's fears about his family's history of heart disease. Channe and Billy attend the local high school, fitting in no better than they did in Paris. Channe begins having sex in the backseats of cars, searching for acceptance and attention. Unsure of herself, she shares intimate conversations with her father about boys and girls and sex. Bill tries to guide her way but feels powerless; he is getting worse, and is preoccupied with trying to finish his final novel about WWII.

With the leaves falling outside their home and Billy raking the yard furiously, a dying Bill tells Channe that she must read the diary of Billy's pregnant mother, a diary Bill has kept all these years in anticipation of the day when his adopted son would want to know the truth about his origins. Struggling against time to finish his novel, Bill speaks the final chapters into a tape recorder from his hospital bed and passes away.

Billy and Channe are brought close by the enormity of their loss. Marcella tries to give Billy his natural mother's diary, but he refuses to take it. He gives it instead to his sister Channe, in an unprecedented act of love and trust, saying he can manage only one mother at a time. In bravely attempting to fill the role of the responsible man of the family, holding everything together, he comes closer to his American father than he had ever dreamed of being.

Kaylie Jones' novel A Soldier's Daughter Never Cries, which had been published in 1990, was given to me by Robert Halmi, Sr. to read soon after the completion of our film Mr. and Mrs. Bridge, on which he had been co-producer. He wanted to do something else with us and hoped I would like the new book, which he had optioned. I was at once attracted to it and said yes. What drew me to this material? Like Mr. and Mrs. Bridge, it was, for me, the autobiographical element on many levels. Beyond that, we had so enjoyed ourselves when we worked in Paris on Quartet (1981) and Mr. and Mrs. Bridge (1990), that we wanted to go back to shoot there again. And then, Paris is a city that has drawn me to it all my life, from the age of 22, when I first went there hoping to enroll in cinema courses at the I.D.H.E.C. (the government-run film school). However, the Korean War began and made that impossible. In the 1970's I had been very close to an American family trying to bring up their four children in Paris, where they attended the kind of international, bi-lingual schools seen in this film. That family, like the Willis family of our movie, eventually returned to the United States (partially because of the illness of one of the parents) and the half-assimilated, French-speaking American children took up new lives. Then again, coming from a family myself in which adaptations are not unknown, I was drawn to the story of Benoit -Billy Willis, the French boy adopted in the film. And beyond that, the story of Francis Fortescue interested me greatly: the clever sissy who knew from the first grade that he would take up a "life of art."

A Soldier's Daughter Never Cries of course is in many respects autobiographical for Kaylie Jones, the daughter of author James Jones. Like the Willis family of the book, the Jones family -James, Gloria, Kaylie and Jamie -lived in Paris for many years. When, in middle age, Jones began to feel uneasy about living any longer overseas and, like Willis in the film, became fearful his children would turn into "Euro-trash brats," never knowing who or what they were, he packed everybody up and returned to the United States, eventually settling into Sagaponack on Long Island. In my mind, I based the character of Willis as much on a college friend of mine as on the character drawn in Kaylieï¿½s book -his Western speech, his cusswords, his common sense attitude to life. Kris Kristofferson, without having ever met either model, uncannily managed somehow to personify them both. For Francis Fortescue I sometimes drew on myself; it was I, who told my teacher in the 2nd grade that I could not stay in school because I had been invited to an "early dinner party" -a line that I must have picked up from some Hollywood movie about big-city smart life, for certainly there was no such parties in Klamath Falls, Oregon in the 1930ï¿½s. Like Francis, both as a small boy and later as a teenager, I lived a life of constant self-dramatization -a fact most people meeting me now might not imagine.